Clips from the previous episode.

FAYE: I feel like I'm in a confessional... Have you ever had experience as a minister?

The bathroom at Gren's apartment. Gren showers, Faye pulls away the curtain. 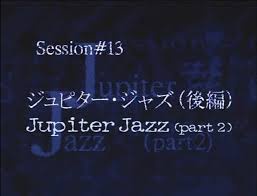 Spike is unconscious in the snow.

GREN: I was in the same unit as Vicious on Titan. You said that you didn't need comrades... but I'm attracted to that word... to the point of tears... On Titan, we were all comrades... 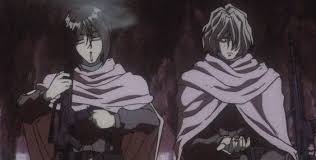 Gren remineces the past. Titan. A constant sand storm. Gun and canon fire. Mines. A skeleton with a rifle. 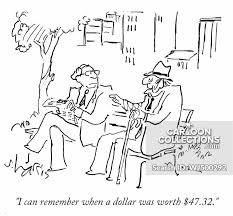 Gren lies back in a trench. He hears a music box to his side. In that direction, he sees Vicious. He approaches Vicious.

GREN: What song is that?

GREN: That's a good tune. Would you mind if I played that tune on my sax when I go home after all this?

Vicious gives him the music box. Vicious gets up. Suddenly, he turns around and thrusts a combat knife next to Gren's head. Gren looks to his side. A scorpion is split in two. Vicious walks away.

GREN: After I came home from the war, I was imprisoned. They suspected that I was a spy. I heard that Vicious testified against me. In prison, I went insane from insomnia. As a result, I became a drug addict. There were side effects... My hormonal balance went out of whack, and this is what happened. You're the second person to know Vicious since I arrived here. And the second that I've talked about this to...

FAYE: Why are you going to see Vicious? Didn't you just say that he framed you?

GREN: I want to see if he really did.

FAYE: You're going to die.

GREN: I'm not afraid to die.

GREN: Either way, I won't last much longer.

GREN: Perhaps I wanted to be with someone...

FAYE: You selfishly help people, and bring them along and then you go off to die?

Faye fires at Gren. Gren dodges and binds her.

Rester House. Jet talks to the bartender, presenting a photograph of Faye. All stools are up on the counter except for the corner bar stool.

JET: Are you sure it was this woman?

BARTENDER: Yeah... It's been six months since I last saw a woman in the flesh... and two years since I saw someone that good-looking. Of course I wouldn't make a mistake!

JET: I never wanna live in this town...

BARTENDER: She sat there, and was talking to Gren. Julia always sat in that seat, too.

BARTENDER: She suddenly wandered in two years ago, and disappeared before a month passed.

JET: What kinda woman was she?

BARTENDER: She was a real babe.

VICIOUS: Be careful when you're with that woman.

JULIA: Women are all liars...

SPIKE: When this is over, I'm getting out of all this. And then... will you come with me?

VICIOUS: Are you going to betray me?

JULIA: They're going to kill you...

FAYE: Oh, you're finally up. You've slept too much. It's been three days.

JULIA: Your left eye and right eye are different colors...

SPIKE: My left eye sees the past...

JULIA: Then what about your right eye?

Spike regains consciousness. A crow stands on his chest. 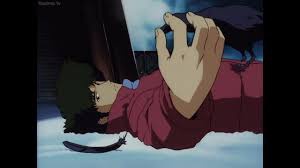 The crow flies away.

He feels his wound.

SPIKE: Tranquilizer, huh? They're mocking me...

JET: Sorry, but can I ask ya something? Where is a blue apartment building called Orlando?

MAN: Don't ask me! I don't know anything!

MAN: I want nothing to do with foreigners from now on...

The man tosses himself into a garbage truck.

JET: What the hell?

Jet turns his head and sees the building.

Gren's apartment. Jet enters a room and sees Faye lying on a bed.

JET: Hey! Hey, get it together!

JET: What the hell are you doing? What's all this about?

He turns her and sees handcuffs.

JET: He was one of THOSE kinds of guys?

FAYE: What are you saying? Gren... isn't like that.

VICIOUS: Julia was here... in this town.

Spike receives a call from Jet.

JET: I got something good.

JET: I know about the guy from that code name "Julia". It's a guy named Gren. He's an escaped convict, and has a hefty bounty on his head. If you catch him, I'll let you back on.

GREN: Come to the roof of the building closest to the sky. I'll send a woman over.

VICIOUS: I don't care... Although I would have liked to see you as well...

Jet flies Hammerhead with Faye in Red Tail attached to the bottom.

JET: You broke the Bebop, but kept the Swordfish and Hammerhead mobile. Did you leave that message so that we'd come find you?

FAYE: You've got to be kidding.

JET: Were you just testing us?

FAYE: Why did you come here?

JET: I want my money back.

JET: Dunno... but she has something to do with Spike. That's all I know.

The Bebop. Ed lures Ein to her with a trail of food items.

ED: Souvenir, souvenir, is it here yet?

Atop a building. Gren, in women's clothing, stands several yards away from Vicious and Lin. He puts down a bag full of viles of Red-Eye. Lin approaches Gren and examines a vile with spectrum device.

VICIOUS: Hand it over.

Lin puts down a suitcase in front of Gren.

LIN: This is the Titan Opal that you requested.

VICIOUS: Give Gren my regards.

GREN: You saved me from that scorpion back then... Yet you sold me out...

Vicious stops. Gren slides the suitcase over to Vicious. He shoots at it until it opens, revealing an explosive device. The case detonates.

From a distance, Spike is alerted to the explosion and boards Swordfish.

Atop the building. Lin is hurt from the explosion. Gren points his gun at Vicious.

VICIOUS: What are you up to?

GREN: You gave me that music box because you never thought I'd take it apart and examine it?

VICIOUS: You found the transmitter...

GREN: Julia was the one who found it. She realized as soon as she heard it was a gift from you.

VICIOUS: And what about it?

GREN: Are you trying to kill me again? We fought in the war together... We were comrades... We fought together... on that desert battlefield... I looked up to you... I believed in you...

VICIOUS: There is nothing there to believe. Nor is there a need to believe...

Lin is shot dead. From above, Spike witnesses Lin's death in Swordfish.

VICIOUS: In this world there is nothing to believe in...

Vicious tosses the bag into his fighter. Vicious and Gren board their fighters. Spike fires at Vicious.

SPIKE: Vicious! Lin's soul won't be saved since he lost his life protecting someone like you!

VICIOUS: I'm not what he was protecting! He protected the rules!

VICIOUS: You're in the way!

Vicious fires two missiles at Gren. One of them hits the engine. Gren coughs violently. Spike destroys the other missile. Gren's ship steadily loses altitude. Vicious fires two missiles at Spike. Spike maneuvers one into a building and destroys the other one with the laser canon. Vicious continues to fire at Spike. Suddenly, Vicious hears the music box from inside the bag of Red-Eye. The music box explodes, destroying his right wing. He escapes onto a Red Dragon cruiser.

Spike lands Swordfish next to Gren's crashed fighter. He finds Gren, lying in the snow.

GREN: Do you know her?

SPIKE: Where is she now?

SPIKE: He hit some vital organs.

Spike takes out his communicator and begins to dial.

SPIKE: Shit, would an ambulance come to a place like this?

Gren pushes the communicator away.

GREN: Can you lift me up into the pod again? I want to go to Titan...

SPIKE: You can't possibly last in your condition! It would take too long!

Spike puts Gren in his fighter.

GREN: I see. You are Spike. Julia was always talking about you... That your two eyes were of different colors... That's what she said... That you get a strange feeling when you look into his eyes...

SPIKE: What was she doing?

GREN: In the corner seat of the bar... She always sat there while I wasn't paying attention... She always requested the same song... and smiled. Sadly... smiled.

Spike launches Gren's fighter on a course to Titan.

Spike fies back to the Bebop.

JET: What do you have?

JET: Hurry up and get in. We're taking off.

ED: Where did all of you guys go?

ED: Ed's the only one left out!

FAYE: You're not being cute.

BULL: One who has finished his battle somewhere on this planet. A pitiful soul that could not believe in the Great Spirit...

DO YOU HAVE A COMRADE?

SPIKE: "What is going on with this world? In life, darkness looms one inch away from you. This world is truly full of mistakes. In that case, we'll step away from the mainstream and lead the life of a dropout." A psychedelic rhapsody for someone just like you. Next episode:  "Bohemian Rhapsody." Now, won't you waste away your life with us?