Mars. Julia walks into an apartment. A recorded messege from her informant, Shin plays.

SHIN: The elders are going to be on the move. It is dangerous over there as well. Please hurry.

THE REAL FOLK BLUES (PART I)

WANG LONG: What a foolish act you have done. The fortune-teller told us  thus. "The night of the red moon, the snake will slither horribly quickly to make use of its venomous fangs."

SOU LONG: We have informed you of our decision that you cannot be our successor.

VICIOUS: The syndicate does not need corpses who cannot even fight.

WANG LONG: That arrogance of yours will ruin everything in the end. Take him to the punishment chamber.

WANG LONG: You cannot choose how you will die. After we let you have a good taste of humiliation we will send you into the underworld.

Vicious is taken away.

Loser Bar, somewhere on Mars. Jet and Spike sit at the counter, depressed.

JET: Sheesh, that was the first time we screwed up so badly. We never had anything like that before when we were all alone. All told, they screwed up our plans right to the end. They really were like troublesome babies. I completely understand why you hate women and kids now.

Jet and Spike sense danger from outside. They duck and gunfire enters from outside, killing the unsuspecting bartender. Spike grabs his drink from the bartender and takes a sip.

SPIKE: Too much vermouth.

Spike fires back and guns down a thug.

JET: Who are they?

Jet is shot in the thigh. Shin enters.

SPIKE: If you change sides, you won't be able to return to the syndicate. What happened?

SHIN: Vicious is to be executed. He failed to pull off the coup, and has been put under restraints by the elders. You are in danger as well.  And Miss Julia...

SHIN: They're in the city of Tharsis. I'll hold them off here. Please go!

SPIKE: I'll owe you one, Shin!

At the doctor's office. The doctor fixes up Jet's wound. Spike is in deep thought.

JET: I don't know what happened to Red Dragon but it's not really your problem now, right? Vicious, Julia... To me, both those names sound nothing but ominous. Just like a magic spell that opens a door that shouldn't be opened. You're -

The doctor takes the bullet out of Jet's thigh. Jet writhes in pain.

JET: You are no longer a member of the syndicate...

Jet looks at the doctor.

JET: You too... Forget everything, including the fact that we came here.

DOCTOR: What are you talking about? I'm just treating stray cats that wandered into the office. Stray cats that I can't ever get rid of...

Spike recalls a moment in Julia's apartment three years ago.

SPIKE: When this is over, I'm leaving the syndicate.

SPIKE: I'll let them say I'm dead. I'll be waiting at the graveyard. Of course, I will be alive.

SPIKE: Come with me. We'll leave here... We'll escape from this world.

JULIA: And then what are we going to do?

On the road in a red convertible, Julia recalls another moment.

VICIOUS: Even if it's a dream, that's an impossibility.

JULIA: Are you going to kill him?

VICIOUS: Yeah... with your hands. You stay alive... or you both die. You can choose.

The chamber. Vicious is chained to the wall.

At a spaceport on Mars. Faye overhears an old woman talking to herself.

WOMAN: So there is no place for me after all. I won't go no matter who comes to pick me up. Never. I don't want to live a life where I'm always in someone's way.

A familiar-looking man runs to the woman.

MAN: Mom! I've been looking for you!

MAN: I told you to wait in front of the curry restaurant!

WOMAN: It sounds too good to be true that you can take care of me now.

MAN: Mom, I want to live with you.

WOMAN: You found a job?

MAN: Don't worry about that.

WOMAN: What about your female co-host?

MAN: I heard she's getting married.

The two walk away.

FAYE: Something about this...

The garage at the spaceport. Faye walks to Red Tail and receives a call.

SPIKE: Where are you now?

FAYE: What is it?

SPIKE: I'm heading out to the city of Tharsis. You should head that way, too.

SPIKE: It's hard for Jet to get around on his own. Especially after getting shot in the leg. I'm telling ya to stop wandering around so much, and just come back.

FAYE: Don't just assume that I'm coming back! You've got to be kidding! I have a place to go back to!

FAYE: What's with that attitude? Like he's all high-and-mighty. What does he mean, Jet's by himself? HE's there... Ed and Ein too...

Suddenly, Julia's convertible speeds down the street. A syndicate car Chases her, firing. Faye shoots one of the cars' tires flat. Julia gives her a lift. Another car continues chasing the convertible. Faye shoots the hubcap off the car. The car spins out of control and flips over. 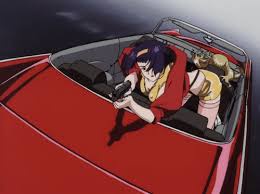 Julia and Faye take a break on the side of the road.

JULIA: You saved me.

JULIA: You're a good shot.

FAYE: I was getting bounties with it.

FAYE: Although now I'm kind off on a break 'cause there's something going.  You look like you have something going on, too. It might be good to pair up with another woman. How about it? Wanna be my partner?

JULIA: Do you know any bounty hunter hangouts?

FAYE: I can help if you want to put a bounty on someone.

JULIA: I'm looking for a bounty hunter. I'll drive you back.

JULIA: It's a common name.

Julia stops at the spaceport garage.

The Bebop. Jet wakes up in an empty living room. Walking on a crutch, he finds Spike in the control room.

SPIKE: Does it still hurt?

JET: Do you know a story that goes like this? A man injured his leg during a hunt. In the middle of the savanna with no means to treat the wound, the leg rots, and death approaches. The man got onto the airplane that finally arrived and there he sees a land of pure white below him. The place glistening in the light was the summit of a snow-covered mountain. The name of the mountain was Kilimanjaro. The man thinks "That was where he was headed..."

JET: I hate this story. Men only think about the past right before their death, as if they were searching frantically for proof that they were alive. Turn back. You told me when we first met that you were a man who had already died once. Just forget the past, okay?

They look down at the surface of Mars.

SPIKE: There was a woman. For the first time in my life I saw a woman that was truly alive. That's what I believed. She was a piece of me I had lost. She is my other half that I had longed for.

JET: Oh, man...We're not a repair shop. Don't come back just when you broke something -

FAYE: Where is he?

FAYE: The one with the fluffy hair.

JET: What, can't you just say you're looking for Spike?

FAYE: Where is he?

JET: He's in the workshop. What are you trying to hide? You came back here just to see Spike?

FAYE: I was asked to relay a message from Julia.

JET: What, I don't have any information now. We're not really able to -

BOB: I'm glad you're all right. I was worried. It's getting to be pretty bad, you know...

BOB: Yeah... There was apparently a coup two days ago concerning who was going to be the syndicate's successor. In the end the elders won, and they're now out to annihilate anyone who was involved in the coup. Your partner will also -

JET: Been there. But why are they trying to get rid of those that already left the syndicate?

BOB: Anything against them will be annihilated, down to the very last seed. That's how they do it.

BOB: Just run. The police can't handle all of it. Leave Mars.

JET: Too late for that.

The workshop. Faye stands at the doorway. She tries to speak to Spike but no words would come out. Spike notices her.

FAYE: How much will you pay for it?

Syndicate ships from outside shoot at the Bebop. The entire ship shakes.

SPIKE: You sure came back at the worst time...

FAYE: Weren't you the one who called me here?

SPIKE: Or... maybe they followed you here? Oh, well. It was gonna happen sooner or later.

Faye chases Spike into the hanger. Spike hops onboard Swordfish.

SPIKE: I don't have any money.

FAYE: She said she'll be waiting there. She said you'd understand.

FAYE: It was from a woman named Julia. Someone was after her... They were chasing her...

The Chamber. The elders and a firing squad stand before Vicious.

WANG LONG: You who caused a disturbance in our clan's affairs. By the will of the clan, you shall be executed.

Spike struggles to defend the Bebop from the syndicate ships.

FAYE: Let me out too!

FAYE: The end is the same if we go down ship and all! (compare to Boogie Woogie Feng Shui)

SOU LONG: Will you leave words?

PING LONG: Or leave something material?

The Bebop. Spike and Faye continue defending the Bebop.

The Chamber. Sou Long and Ping Long are killed by gunfire. Vicious receives his sword, approaches Wang Long and puts his blade to Wang Long's eyes. The thugs pause.

VICIOUS: You shall shed red tears.

The Bebop. Spike destroys the last of the syndicate fighters.

JET: Spike, can you still fly? Don't worry about us. Just go! Go grasp that thing you had lost. GO!

VICIOUS: As of now, the leadership has changed hands. From now on, I will dictate all authority and symbolism of this syndicate.

A graveyard. Spike finds Julia waiting for him. She points a gun at him. 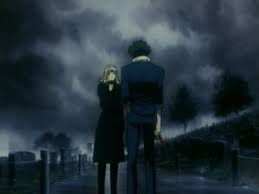 SPIKE: A lot of things have happened, but the next episode is the last.

SPIKE: No use doing this...

JET: Because of you, I ended up raising Ein.

JET: Dogs are really cute after all...

JET: I wonder why we gave him away...

SPIKE: ...listening to what I'm saying at all!

FAYE: What? This is the end?