Faye watches the beta tape in the darkness of her room. She pauses it at a shot of a stone lion head fountain. She closely examines it. Suddenly she is startled by the presence of a dreary Ed.

boring and making you feel unhappy

FAYE: S-Since when were you...

FAYE: You know this?

Faye grabs Ed and blows air into her mouth.

Earth. Spike brushes his teeth on the deck of the Bebop. Jet rushes out.

JET: Hey, Spike, where the hell are we?!

JET: Earth?! Hey, this ship was headed for Mars! Why the hell are we on Earth all of a sudden?!

JET: Shit, this isn't funny. While we're wasting time, our fugitive - It was the first big one in a while... In any case, why the hell are we on - ?

SPIKE: Jet. The women are gone.

Faye flies in Red Tail. Ed is strapped to the top.

FAYE: Listen, if you lead me to that "water sploosh" place I'll give you something good.

A meteor crashes on a patch of land. A truck approaches it. Two mapmakers, Appledelhi and Macintire rush down into the crater to measure it. Their feet are burned.

In a pile of rubble. Ed digs up a watering can.

FAYE: I knew I shouldn't have trusted you...

A group of orphans emerge from the rubble and approach them.

ED: Ed has been found?

FAYE: What, you know them?

A girl named Zuzu with a jar of yellow nails approaches Faye.

ZUZU: Hey, can I have your nails?

She pulls out a clipper.

ZUZU: Can I, please? Just the pinky one will do!

The nun caring for these children, Sister Clara, turns on a hose.

CLARA: What are you guys?!

She sprays Faye. A children hide behind a small pile of junk. Suddenly Clara notices Ed.

An orphanage. The roof is decorated with pinwheels.

CLARA: I'm sorry about that. That's the best way to make the kids listen.

Faye dries her hair with a towel.

FAYE: It's all right. Is Ed from this place?

CLARA: She wandered in about five years ago. Before I knew it, she was eating with us as if it had always been that way. And about three years ago, she wandered away. As if she was a cat or something. I was wondering how she was doing nowadays but I didn't think she would suddenly appear.

CLARA: All right, it's time to eat!

The children gather around the table.

CLARA: Our Father who art in heaven... Never mind the rest. Let's eat!

The children eat heartily. Faye stares at the fish head in her bowl.

CLARA: What, you can stay longer, right?

FAYE: I'm actually looking for something...

ED: Ed knows where it is. We just came here for food.

ED: You have to gimme something good!

CLARA: Oh yeah, Ed. There's something good in the desk drawer over there.

CLARA: Go get it.

Ed runs to the drawer.

CLARA: Inside that drawer.

CLARA: Yeah, that. Open it!

Ed opens it. It projects an image of Appledelhi.

CLARA: He came looking for Ed about 2 months ago. He said he forgot that he had put her in a day care center and that he had been looking for seven years, hopping around the world. I hope she will be able to meet him... People have to cherish what ties they have...

A crater. Appledelhi and Macintire chart the new formation. The map is updated.

The Lion Head Fountain. Stay stand by it. The place is now in ruins. An elderly woman in a wheelchair approaches Faye. She is Sally Yung, a former classmate.

SALLY: Impossible... Really? It's me, Sally Yung! I was in your high school graduating class!

FAYE: Are you all right?

SALLY: I was really surprised. I thought you were a ghost. You look just like back then... You know, they say ghosts appear in places where they have regrets... Oh, yeah, I remember now. You were put in cold sleep after that accident. And that's why you look like back then...

A little girls runs toward Sally.

SALLY: Is it that time already? Do you know who this is? I bet you don't know.

The girl looks at Faye.

Faye runs off, grabs Ed and takes off.

The Bebop. Faye and Ed return.

JET: Hey, you guys! What's with this course change without asking?! Our plans have all been screwed because of it! I don't appreciate you doing things on your own!

Faye stares at Jet. Jet is silent. Faye goes into her room.

ED: You want to smell something really good?

JET: What's with them? What are they being so secretive about?

JET: Maybe they're too hungry for their own good. Humans go insane if they don't eat food.

Spike sees new bounty data on the monitor. It is Appledelhi.

APPLEDELHI: You sure? Eggs are good. As they say, power and charge. That's what's important, Macintosh.

MACINTIRE: That's Macintire. Why is it that you can't ever remember your assistant's name?

APPLEDELHI: Hm, don't worry about the small things in life.

A meteor crashes. Appledelhi climbs back into the ship.

The Bebop. Faye suddenly regains a memory. She remembers the shuttle accident.

Faye bumps into Spike in the hallway.

SPIKE: Watch where you're going! Hey...?

The deck. Faye prepares to leave in Red Tail. Ed pops up.

ED: Going out? Where are you going?

FAYE: I finally remembered where I belong.

ED: Where you belong?

FAYE: You have someone waiting for you too... You have somewhere you belong. You should go look for it, too. That's the best thing, you know...

JET: This one is a piece of cake. 50 million is right there! If they can eat sukiyaki with meat, then they -

JET: Again? Where the hell did she go this time? A woman's heart and the skies of Ganymede, was it...?

A crater. Jet points a gun at Appledelhi.

SPIKE: You're Appledelhi? Can you come along with us?

JET: Cooperate with us if you don't wanna get hurt.

MACINTIRE: Who are you guys? Don't interrupt our work!

APPLEDELHI: This Earth of wild chaos! What do we need to do to regain a peaceful peace and end the chaos here? That is a map! A map! Yes, happiness comes in the form of a map!

MACINTIRE: We are creating maps to save the Earth!

JET: A map...? But meteors fall often and change the landscape.

MACINTIRE: That's why we're globe trotting. We're chasing after every meteor! Until every single meteor falls onto Earth!

Jet looks at Spike with skepticism. Spike draws his gun.

SPIKE: Enough with the excuses!

SPIKE: I wasn't expecting someone this adept.

Spike rushes forward again and Appledelhi defeats him. Again, and Spike loses again. Suddenly the Bebop lands in front of them advancing pass the shoreline and crashing into the land.

It stops in front of Appledelhi. Ed looks down from the deck. Appledelhi looks up. He smiles and opens his arm.

APPLEDELHI: How's that? And that, and that?

Ed walks forward and introduces Appledelhi to Spike and Jet.

SPIKE: She had such a thing?

He walks forward and head butts Spike to the ground.

APPLEDELHI: Oh? I see. Thank you for taking care of my son. Or was it daughter? Oh, well, it's all right either way. That's a token of my appreciation.

He putts a basket of eggs on Spike.

Jet rereads the bounty data and notices a decimal point in the number instead of a comma.

APPLEDELHI: So, you wanna come with me?

Another meteor crashes in the horizon.

Elsewhere. Faye returns to her former home and finds that it is no more. All that is left is a fountain with a broken lion head and an empty lot.

The Bebop. Ed gives Spike a pinwheel and leaves. Jet cooks the eggs in the kitchen. Ein senses something, looks up at Jet and heads for the door. He gives Jet one more look and then leaves. Outside, Ein gives the Bebop another look, begins to head back, then turns around and head for Ed.

Jet looks into the living room.

The living room is empty.

Jet finds Spike in the control room looking out on the deck.

On the deck, Ed has written "Bye Bye" with a large smiley face. 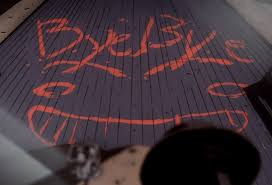 The empty lot. Faye draws a rectangle on the ground where her bed would have been, then lies down and watches the sunset.

The Bebop. Jet and Spike eat their share of the eggs alone.

ED: You can't come with me, Ein. Ed is going someplace far, far away. I might not be coming back. So, Ein, you should go back home.

ED: Do you want to come with Ed? 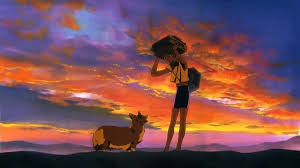 The Bebop. Spike and Jet begin to eat the rest of the eggs.

The two run into the sunset.

JET: Everything has a beginning... and an end. Life is just a cycle of them. With unwanted endings, becoming an adult is to experience the inevitable finale. It's been a fast trip for Bebop, with only two episodes left. But make sure you pay close attention to how it ends. Next episode: "The Real Folk Blues (Part 1)."

THE REAL FOLK BLUES (PART I)