The Bebop. Ein barks. A bounty named Baker Panchorero is tied up. He kicks a can at Ein.

Ed falls from a panel in the ceiling, hitting Baker on the head then lands to the floor. On the floor, Ed rolls back and forth then lies still. Panchorero taps Ed's head with his foot. Ed growls and grabs him.

Ed bites his ear. Panchorero shakes her off. Ed grabs his leg and bites his thigh.

The Control Room. Jet looks into an old watch that stopped ticking. He remember the past. A rainy night. A letter and the watch. A woman walking in the rain. 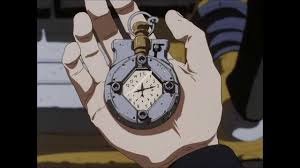 SPIKE: I'm asking ya, how much longer before we land?

JET: How long ya been standing there?

SPIKE: I've been here for a while.

FAYE: What're ya spacing out about? Where's my bounty? Can't you land quickly so I can hand over that musty-looking fugitive?

SPIKE: What, you haven't even gotten permission to land yet?

JET: I know. You guys are so obnoxious. Don't rush so much! And take care of the airport end for me.

FAYE: I thought Ganymede was your homeland. Were you perhaps thinking about some woman in the past that cried over you?

FAYE: Or perhaps a woman that made YOU cry?

JET: Didn't ya hear me when I said you're being obnoxious?!

An old officer receives their call. It is one of Jet's old friends, Donelly.

DONELLY: Yes. This is Ganymede police.

DONELLY: Oh, Jet! Jet, it's you! There is no mistake. The top of your head's gotten rather lonely, but it's still Jet all right!

DONELLY: I'm surprised that you're working around here. Has it been... Seven years? Eight? What the hell's up with you to come back so suddenly?

DONELLY: To think you're a bounty hunter. You, who was called the Black Dog, a mad dog that never let go of things bitten into?

JET: I thought YOU had already retired.

JET: That example is completely reversed! 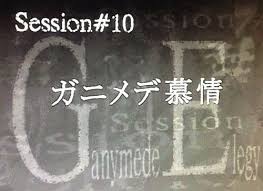 DONELLY: She's got a little joint in the port of Marvis. A small bar called "La Fin." But in this recession, I hear she's got a lot of debts to pay. I'm sure there are a lot of problems for a woman trying to live alone.

Outside a police station. Spike collect the bounty from a machine.

FAYE: You're totally wrong if you think your old woman still thinks about you.

SPIKE: You're totally wrong yourself if you think every other woman thinks like you.

Ed swings by with Ein.

The deck of the Bebop. Faye in a bikini prepares for a tan.

ED: Hey, why are you rubbing that stuff on?

FAYE: Beautiful skin is maintained by continued effort that seems futile. Do you understand?

Ed rubs her head of Faye's thigh. Ed pops up.

JET: An old friend. I was in the area for the first time in a while...

Alisa emerges from the back room. 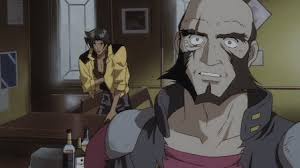 ALISA: I don't, anyway. How about it? You want a glass, right? 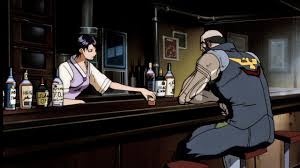 ALISA: You're my last customer. I'm closing shop. The number of ships decreased, and this area has gotten desolate. I'm thinking of moving to a new town.

JET: Are you all right? On the new island cities, mortgage is expensive. Are you able to manage all that?

ALISA: That's so like you to worry about such things. I'm planning to change myself in the new town. Rhint is here with me...

JET: That guy that was just here?

ALISA: Something on your mind?

ALISA: To tell the truth, I already have 3 kids...

Jet stares at her. Alisa laughs.

ALISA: I'm just kidding. It was a joke! Rhint is just my boyfriend. How are you doing? Have you gotten married yet?

JET: I live and wander with a group of weirdos. And on top of it, I'm a bounty hunter now.

Jet places the old watch on the counter.

JET: Do you remember?

The Bebop. Spike fixes up Swordfish II and the Bebop. A call from Donelly comes in.

DONELLY: You're his partner, right?

DONELLY: I've got news on a bounty. This hasn't been publicly broadcast yet. Rhint Celonias. A thug in the port of Marvis. Last night, he contacted financial broker Law Rentzuo. This guy was another tough guy but he was killed!

DONELLY: Rhint is Alisa's gigolo. I thought I'd warn you guys.

SPIKE: And how much is the bounty?

Swordfish II takes off. Spike calls Hammerhead and gets a busy signal.

JET: Back then, when I got home from work, you always waited for me... That was all I needed... But that day, when I came home, only that watch was left and a small note with one word, "farewell"... For some reason, I didn't feel sad. It just lacked reality... And I gradually felt something inside me go numb... After 6 months, I made a bet with myself. If you didn't return by the time this clock stopped. I didn't come here to blame you... I just wanted to know... why you disappeared back then.

ALISA: You seem to think that time on Ganymede had stopped. That's a story from long ago... I've... forgotten it. I don't need time that stands still. Farewell, Jet...

Outside La Fin. Rhint remembers the moment he killed Rentzuo. He spots Jet walking by. Jet gives him a good looks and then leaves

Jet takes off in Hammerhead.

ALISA: It's not your fault... It's because I borrowed money from a guy like him... and you protected me...

Rhint and Alisa board a motor boat. Spike finds them and chases after them.

SPIKE: This must be because I have good karma... Sorry, but it's business.

RHINT: Steer for me, please.

Rhint fires shots at Swordfish. The boat goes under a skyscraper. Spike pulls Swordfish up at the last minute, scaling the skyscraper. At the same time, Hammerhead flies over the building. Swordfish and Hammerhead nearly collide.

SPIKE: I'm after a bounty worth 1.8 million.

SPIKE: Yeah, a secret bit of info from Donelly. He apparently killed a loan shark.

He continues to fire shots.

SPIKE: You're not gonna let him go, are ya?

JET: This is the land where I was a cop. I'm the Black Dog, once I bite, I never let go. I have no regrets about her, but I'll settle this score on my home turf.

JET: Can you hear me? Stop the boat, now!

The Hammerhead chases the boat through a tight alley and into an open area. Jet fires Hammerhead's harpoon at the boat's propeller. The boat crashes ashore. Jet lands Hammerhead and approaches Alisa and Rhint. Alisa points the gun at Jet. Jet starts to walk forward.

ALISA: Stay away! Please, let us go! There are other bounties to find!

JET: Even if I let you go, someone will come for you someday... If you run, you will become an accomplice.

JET: You still have time.

Alisa fires a shot at Jet.

ALISA: Don't worry about me anymore!

ALISA: You were like this back then, too... You decided everything. And you were always right... When I was with you, I never had to do anything. All I had to do was hang on to your arm like a child, with no cares in the world. I wanted to decide how to live my life by myself. Even if that was a mistake...

Alisa drops the gun. Rhint tries to run away. Jet grabs him.

Jet punches him in the face.

JET: Self-defense seems to be how they see it. What are you going to do now?

ALISA: I won't be going anywhere anymore. I will wait in my store... for Rhint.

JET: It won't take long... because time is flowing along.

Jet waves good-bye and walks away. He takes one last look at the old watch, miles and tosses the old watch into the water.

NARRATOR: Caught by the venomous fangs of the unseen enemy, another victim falls.

NARRATOR: What is the identity of the fearsome enemy that refuses to show itself?

A child cries out.

NARRATOR: A symphony of shivers that will send you into the deepest trenches of terror! Next episode: "Toys in the Attic." Once the channel is set, you will no longer be able to escape...

TOYS IN THE ATTIC