A desert on Earth. Spike spots a ship take off in the distance and tries to hitch a ride. Swordfish II is parked beside him. 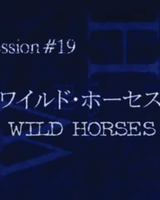 FAYE: Really, this just doesn't suit my style to just sit and wait like this.

The Bebop hides nearby.

JET: We pick our spot, then wait patiently. That is the secret behind fishing.

FAYE: Did you ever consider that may be this was the WRONG spot?

JET: The bait has no right to complain.

ED: What are you fishing for?

JET: "Starship Pirates." A group that calls themselves pirates.

JET: A group of people that like to attack a ship and rob anything and everything from them.

FAYE: Besides, where the hell did Spike go?! He left to overhaul his ship, and still hasn't -

Ein hangs up on Faye.

The desert on Earth. Spike sits in the shade under Swordfish. A truck pulls up. Spike opens the side door.

Inside, a young man named Miles is listening to the radio on headphones.

RADIO: Strike three! Batter out! He just let that one slide by... and that's the game!

Miles kicks the radio, crushing it.

MILES: Man! Why didn't they just send in a pinch-hitter? Come on, Eightwood is getting OLD! Don't ya think?

On the road. Swordfish rides in the back.

MILES: Man, they were really great when they won the pennant 14 years ago. They just kept hittin' the ball one after another, and turned losing games around! Especially when Randy, Blanket and Hills hit consecutive homers... I really wish you coulda seen it. And ya know -  Hey, do people often say you're the silent type?

SPIKE: And people often say you talk too much, right?

MILES: Kinda. The... Swordfish, right? The machine back there...

MILES: I hear ya... Us Blue Sox fans feel like we fell for some wicked broad. Really! I can't remember how many times I've thought about giving up on them!

They enter a junkyard filled with various forms of aircraft. The side of a building housing an old space shuttle explodes.

They walk into the building.

The mechanic Doohan walks out to check out Swordfish, the back of his shirt smoking.

SPIKE: Yo. Long time no see.

MILES: It's out there! I put it on the ship's body!

MILES: I think it's useless. The computer isn't compatible with the mono-system...

DOOHAN: Miles! Gimme the EV Transmitter, the absorber for the main gear and7591125 the three-eight pneumatic tube!

MILES: A three-eight?! I don't have something that special!

DOOHAN: Order one from Reggie. His place has them!

MILES: Yeah, yeah. You really are some slave driver!

Spike looks onto the old shuttle.

Alarms sound on the Bebop.

JET: Did we catch it?

In Red Tail, Faye looks around.

The pirates, George, Ruth, and Harman, fire a harpoon at truck.

GEORGE: This is a good machine. Attacking blessed people like them and

giving to the poor is human equality. Don't you think so?

RUTH: Heh, heh, I get it. This is what ya call social reform.

They real the truck into their haul.

GEORGE: Yeah. It's only right for us, the poor, to take from them!

Red Tail jets toward them.

Red Tail stops in front of their truck.

HARMAN: Be a good girl and come here...

Harman readies the harpoon. In Hammerhead, Jet sees it.

JET: Faye, above you!

HARMAN: Ruth! One more behind us! And it's HUGE!

RUTH: I know. What a tattered old ship!

They harpoon the Bebop. The Bebop goes berserk.

BEBOP: Abnormality found in the mono-system. Booting the emergency pilot

The pirates jet away.

Doohan's office. Spike looks at old photographs on the bulletin board.

The hanger. Doohan tunes up Swordfish.

DOOHAN: Looks like he's taken you on quite a few spins. Cut it!

MILES: The accelerator pump is all worn down.

MILES: And the fuel injector doesn't have a silencer on it...

MILES: But it's noisy, and it trembles...

DOOHAN: If you put one in, then I can't hear what it's telling me! Just

hurry up and connect the injector.

MILES: First of all, a three-eight isn't popular anymore... Why don't you

switch to the new five-zero?

MILES: And if you change the navigation to full-auto then you can glide

along without manual steering...

DOOHAN: Do you want to use a machine, or do you want the machine to use

you? Which is it?

Spike picks up a pointy piece.

SPIKE: You haven't changed a bit. At this rate, another assistant is gonna

DOOHAN: And you! The Swordfish wants to run away from you!

SPIKE: I haven't heard that before.

DOOHAN: If you keep being reckless with her, she'll really throw you off

SPIKE: Unfortunately, I'm not one for delicate controls.

Reggie pulls up in his truck.

REGGIE: Sorry to keep you waiting! I got something you don't see often...

FAYE: Yes, hello? Oh, it's you, Missing Man. Where are you right now?

FAYE: He seems rather busy right now... Saying something about some

JET: A virus! We got a computer virus!

SPIKE: I don't get it. Gimme a simple explanation.

ED: The computer broke and we're just drifting along!

SPIKE: Well, I understood that.

REGGIE: How about it? It's the newest one. You haven't seen one floating

around anywhere else, right?

DOOHAN: A bargain, huh? When it's sold THAT cheap, you lose money even on

Spike continues to talk on his communicator.

DOOHAN: Where did you get this?

SPIKE: A truck? Any features?

Spike and Doohan look at each other.

Spike returns to the Bebop.

JET: Are you sure about the info?

SPIKE: Yeah. They apparently were dealing at the Orbit Drive-in.

JET: I see... nobody would be suspicious of a delivery truck wandering

SPIKE: And how are we going to counter the hacks?

JET: They laughed this ship off as "tattered!" And they made that mess out

of my Hammerhead! Unlike SOMEONE I know, I always pay back what I owe.

FAYE: What a wonderful principle.

JET: I have an invoice from Doohan here.

They take off from Earth.

JET: Because they're PHYSICALLY sending the virus they haven't developed a

vaccine for it. That is where this secret weapon of ours come in.

Jet puts down a communicator.

JET: If you get infected by the virus, cut off the entire mono-system.

Then, all navigation and communication will go down. As I said, I will

navigate you with this. Because this is set to the frequency for an

old communications satellite it has nothing to do with the mono-

Spike sets up the communicator on Swordfish.

RADIO: Oh, another run scored against the Blue Sox!

Doohan's hanger. Miles listens to the Blue Sox game. Doohan hears it and

The Drive-In. Swordfish and Red Tail stop before two trucks with penguins

SPIKE: It was a penguin, right?

JET: There are two of them? Wait a minute, it might be a real courier

service. It's a matter of how to figure out if they are legit...

FAYE: That's easy. We fire a shot, and the one that runs is the one we

SPIKE: This is the first time I agree with you on something...

They fire at the trucks.

JET: What are you gonna do if they're both real?!

SPIKE: They both ran?

FAYE: We didn't consider that option...

SPIKE: I'm trusting you with that one!

FAYE: I have to pay them back for yesterday, too.

Faye destroys the booster engines of one of the trucks. The truck stops.

Faye stops in front of them.

TRUCKER A: Forgive us!

Spike continues chasing the other truck.

JET: Spike! Draw them out!

Doohan's hanger. Miles overhears Spike and Jet's communication on the

JET: It'll be a mess if they let the virus go in there!

Spike hides under the haul and fires at the harpoon.

George releases the haul. Behind the truck are dozens of harpoon guns.

Harman locks on to Spike.

Spike is finally hit by a harpoon.

JET: Cut off the mono-system!

RUTH: That idiot cut off his mono-system!

The pirates truck are hit by a harpoon.

Doohan's office. Miles runs in with the radio.

They overhear Spike and Jet's communication.

MILES: This is pretty bad!

Earth space. The pirates are being pulled into Earth's atmosphere.

HARMAN: You idiot! Hurry up and do something about this!

Until then, keep control manually somehow. Even if everything was

normal, it'd be tough to get outta here.

SPIKE: I can see that. And I just had it overhauled...

JET: Spike, above you.

Spike sees the Bebop above him.

The pirates' truck crashes into a meteor and explodes, harpoons fly upward.

JET: We have to start over!

MILES: No way! Old man, ya gotta be kidding! Are you really gonna move this

DOOHAN: Do you think I'd do this as a joke? Don't just stand there! Hurry

up and get me some fuel!

JET: Spike, can you hear me? I got a calculation. It'll take another 7

hours for us to rendezvous.

SPIKE: Come on, you're joking, right?

JET: We're too close to Earth. The orbital paths I can take are limited!

SPIKE: Isn't there a  way for you to just swing on by?

JET: If I plunge in at this angle, both the Bebop and the Swordfish will

SPIKE: Jet... I have some booze hidden behind the fridge. Feel free to

SPIKE: I'm outta gas. Nothing I can do now.

Doohan communicates to Spike through the radio.

DOOHAN: How about I go there and tow you back, in exchange for that booze?

I heard the conversation. Give me the Swordfish's coordinates.

DOOHAN: Spike, I don't care how ya do it, but slow down using an air-brake.

DOOHAN: If you slow down within Earth's atmosphere the gravitational pull

will accelerate you instead which will give you enough speed to

escape. However, you have to maintain the ship at a certain angle.

Too far either way, and you'll be thrown out to the other end of

SPIKE: Unfortunately, I'm not one for delicate controls.

DOOHAN: Spike... I know you can do it. I didn't give you the Swordfish for

SPIKE: Don't you start crashing, either!

DOOHAN: You didn't have to force yourself to come with me.

MILES: You know how Blue Sox fans love to party!

The shuttle takes off.

JET: You're in too deep! Spike, you'll burn to a crisp!

Spike spots Doohan's shuttle. The back of the shuttle opens up.

DOOHAN: This is the last chance!

Spike breaks off Swordfish's wings and falls into the shuttle.

SPIKE: Doohan, you saved me.

DOOHAN: Not quite. Most of the heat-resistant tiles have peeled off. The

DOOHAN: Oh yeah, and the #2 nozzle won't work either.

MILES: WHAT!? Is that for real? What are we gonna do? We can't land without

MILES: I KNEW I shouldn't have come up here! I'm still too young to die!

Sometime later. Doohan's office. A photograph of Doohan, Miles and Spike is

posted on the bulletin board. Behind them is the remains of the space