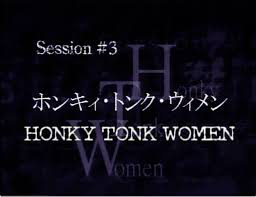 Hyperspace rings over Mars. An herbal medicine shop in the city. A young woman named Faye enters and approaches the clerk.

CLERK: You've got pretty eyes and a smile to match. Lookin' to score riches? I welcome all.

A group of thugs approach the entrance. Faye loads a machine gun.

FAYE: Ya know the first rule in combat?

Faye fires at the thugs.

FAYE: To get the first attack. 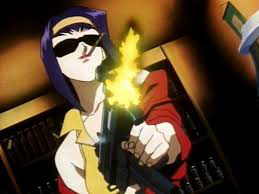 The thugs shoot back, shredding the store. They hold Faye at gunpoint

FAYE: What an extended greeting this is... 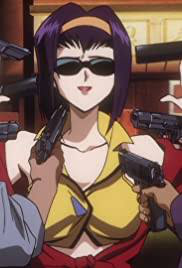 GORDON: I didn't know that the sure-shot and master of poker, the legendary Poker Alice, was still alive.

GORDON: Of course. You sure don't look over 200. Besides, Alice never lost during her lifetime. She kept winning, without cheating.

FAYE: You have a way to prove that?

GORDON: I hear your carrying a large debt.

He pulls an ace card from Faye's shorts.

GORDON: Which do you prefer - the police or my establishment?

A casino called Spiders From Mars floating in Mars space. Spike, cigarette in mouth, and Jet are on an elevator.

JET: Charlie said, "Only hands can wash hands. If you want to receive, you must first give."

Hey, doesn't that mean that Charlie is telling us to just do it? Right?

SPIKE: Do you think Charlie Parker would quote Goethe?

JET: Oh come on, it's all part of the dream I had.

SPIKE: The way things go, I say that even the hard-earned 5000 woolongs will disappear with your dream.

The way things go： things, events, and people are moving along in a such a way because of the way the present situation is developing

JET: Let me tell you something, Spike. This is a no smoking area.

Jet points to a "No Smoking" sign. Spike swallows the cigarette. They enter the casino. 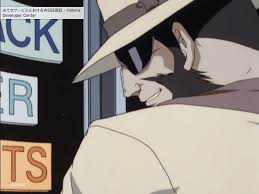 JET: You shouldn't play. Your eyes are too good for this. They'll kick us out if you win too much.

SPIKE: Then don't bring me here.

Spike spits the cigarette into the garbage.

Jobin, Antonio and Carlos play at a table. Antonio is reluctant to flip his card. Spike approaches and taps the card three times.

Antonio flips the card and wins a large cache of chips. Spike takes a small handful.

Jet scores at a slot machine.

Faye deals at a blackjack table.

Faye looks down at a monitor with bad reception displaying a man in a blue suit.

FAYE: Must be him.

GORDON: The target will sit at the blackjack table and lose at a certain point. Of course, you will help him with that. And he will hand you the last chip he has as a dealer's chip.

FAYE: And what about it?

GORDON: It's something that'll make your dept as small as 1 tiny second in this universe.

Back at the blackjack table. 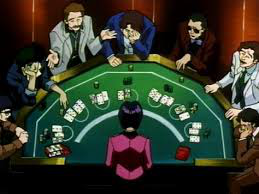 SPIKE: I'm not lucky nor am I nimble.

FAYE: Then what are you?

He holds up his last chip.

SPIKE: I'll take this as a memento.

Spike bumps into a man in a blue suit. Both drop their chips. The man scrambles on the floor and picks up Spike's chip. Under Spike's shoe is the man's chip. Spike picks it up. Faye catches up.

FAYE: Hey, you! What part of you is generous? This wasn't the plan I heard.  I thought you were supposed to give me the last chip?

SPIKE: Why should I?  I played along with you and your cheats.

MAN A: Did ya hear that? Cheating!

MAN B: That for real?

WOMAN: The dealer has been cheating!

GUARD A: Can you come with me to the office?

SPIKE: What do you want?

Spike knocks him out.

Spike dodges his blow and knocks him out. Several more guards appear.

SPIKE: Come on. Does this casino also run a fitness club?

Faye activates her fighter, the Red Tail, with her bracelet.

Spike beats all the guards. Jet emerges from the crowd holding a large box of coins.

The Red Tail flies through the casino.

The fighter lands in front of Faye.

SPIKE: That's not it! But we gotta split!

JET: I haven't cashed these in yet!

Faye boards the Red Tail, blasts open the windows of the casino and jets off. She sees Spike and Jet hugging the windshield of the Red Tail and screams.

In a dark room. The man in the blue suit is beaten to a pulp.

THUG A: He doesn't have it. The chip is a fake.

GORDON: Neither you nor your boss realize why we cooked up this whole thing... If that chip falls into police hands it's all over!

THUG B: Boss, we still can't find that broad.

GORDON: Find her! Put a reward on her if you have to.

The Bebop parked outside the casino. The bathroom. Faye is cuffed to the toilet.

FAYE: Wait a sec! Why is my reward for bringing ya back being trapped in here?! 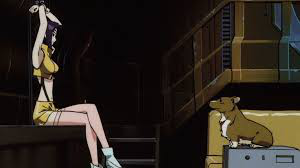 JET: I see. She smells like money to you too, huh?

FAYE: You have GOT to be kidding!

SPIKE: Jet, how much did you have?

SPIKE: And who put it all to naught?

FAYE: What, only 200K? That's nothing compared to my debt... Besides, don't you think this is a bit much for a false accusation?

SPIKE: Well, that mono-carrier should sell for about 400K.

FAYE: If you had just given me that chip, we wouldn't have had a problem.

FAYE: If you give that to Gordon, he'll give you as much as you want. Yeah, let's do that!

SPIKE: I don't know any guy named Gordon nor do I want to believe your stories.

Jet closes the door. He and Ein walk away.

FAYE: Are you listening to me? Come on!

Faye reaches into her suit for a communicator.

The living room. Jet taps on the keyboard.

SPIKE: Of course it's a chip.

JET: I didn't mean that kind of chip. There's a microchip in this thing.

PUNCH: AMIGO! Leave it to us for bounty information!

JUDY: Thanks for waiting! It's time for BIG SHOT!

In the bathroom. Faye adjusts the communicator.

PUNCH: It's a shame we have to hand her to the police. She doesn't look it, but she's a real mean one. Faye Valentine.

JUDY: The bounty is a whooping 6 million! A real deal!

GORDON: I've been waiting for you.

FAYE: First off, let me tell you that I didn't intend to run.

GORDON: I trust you. Where are you?

FAYE: An old fishing ship in the gate. They have the chip. So hurry up and-

Faye is cut off. 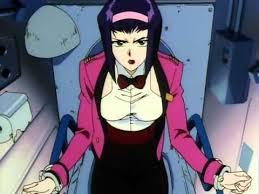 JET: We thought we were being immature. To leave a young woman in a place like this.

FAYE: You aren't thinking weird thoughts, are you?

JET: No, we thought we'd escort you to a place more considerate of your situation.

FAYE: On, and where would that be?

SPIKE AND JET: The police.

JET: We're sorry that we were so cheap earlier with the 200K bit, Faye Valentine.

FAYE: What, there's a bounty out on me?

FAYE: Come on, please! Anywhere but the police.

JET: Only the police would give us money.

FAYE: My mother's last will was for me to not be in any place for too long!

FAYE: My family have always been "Romanies," wandering about in search of love. You don't know anything, do you? That's another term for Gypsies! Everyone else, like you guys, with no pride in their lives are called "Gorgio."

SPIKE: I'm fine with being a "Gorgio."

FAYE: It's calling me... The great outdoors are calling out to me...

JET: You can do all of this with the cops.

FAYE: Oh, fine. I won't run. At least untie one hand! I can't even go to the bathroom like this!

JET: Man, we got one yappy woman here...

SPIKE: More like a small sacrifice for a large reward.

JET: Charlie said, "If you want to receive, you must first give." I guess what I see in dreams is worth something once in a while...

Gordon's ship pushes on top of the Bebop.

SPIKE: What do you think you're doing?

GORDON: I don't know who you are but I would like the chip back.

SPIKE: I don't know who you are but I refuse.

GORDON: It's just a chip that means nothing to you.

JET: Although we can sell what's IN the chip for a pretty penny. There was a decryption program called Crypt-Breaker that was developed by SIT three years ago. Rumors say that right after its completion, the programmer was killed and the program went into the black market. It's a "magic key" that can decode and unlock almost every protection code. But that program itself was encoded. So there was a need to find the key to open the program. I heard rumors that both the cops and the ISSP were parting hairs to find the key... I never thought I would see it in a place like this.

JET: I used to work in a shady place called the ISSP. I'm sure the casino was to take attention away from the large sum of money and to fool the cops. You just chose the wrong day. Of course, this thing is useless for us as well. I would only be proper to give it to the cops.

The bathroom. Faye uncuffs her other hand.

Outside in space. Spike prepares to do the exchange.

Spike floats to Gordon's ship. A thug carrying a case of money rises from an elevator.

The Bebop. Ein spots Faye and chases after her.

THUG: Someone who specifies cash up front is rare nowadays.

The thug displays the case of money. Spike holds up the chip.

GORDON: All right. We'll both count to three. At which point we will release the magnetic field of the suitcase and send it that way.  You toss the chip our way.

On Gordon's ship. Gordon signals one of his henchmen.

GORDON: When you confirm we got the chip, sink that ship.

The thug reaches for a gun inside the suitcase.

Spike lets go of the ship. The thug fires at Spike. The shots are blocked by the rotating gravity generator.

On the Bebop. The Red Tail crashes through the shutter and jets off.

JET: Shutters are meant to be OPENED!

Spike floats to the thug from above, dodges his shots, turns off the thug's gravity and kicks him off the ship into deep space.

Spike catches the chip. The Red Tail flies next to Spike.

The Red Tail takes the case of money and flies away.

GORDON: Don't let her get away. Fire!!

Spike jumps from the ship.

GORDON: Get them! Get them! What the hell are you doing?!

HENCHMAN A: She dropped the chaff!

HENCHMAN A: Missiles are approaching!

Gordon's ship blows up. Spike returns to the Bebop.

Outside a casino on Mars. Spike holds the chip in hand.

SPIKE: It's only proper to use it.

JET: Guess we have to build up again from square one.

Spike and Jet approach the casino. A man yells from a distance.

A ship leaves the planet.

JET: It sucks... this world is such an unruly place. Economic recession everywhere, making kids lose their minds...

SPIKE: Come on, this isn't the time to be reading the paper! Things around the Bebop are becoming even more unruly!

JET: Bah, this is nothing! Look at this - terrorists! Apparently they want to blow Ganymede up.

SPIKE: Oh? Environmental Protection Society? Perfect! We can have them take care of this fleabag.