SESSION #6 - SYMPATHY FOR THE DEVIL

Distorted images. Bubbles, a fish with large fins, various organs, a black sphere. A group of

A blues house. Spike wakes up from a dream and sees a talented harmonica playing boy.

Session #6 - SYMPATHY FOR THE DEVIL 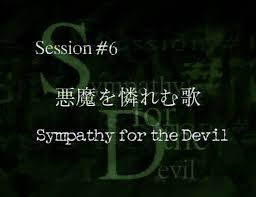 The Bebop. Faye walks to the refrigerator. Empty except for a can of dog food. Ein pants. Faye spots Ein, and smiles. She opens the can and begins eating its contents. Ein stops panting.

FAYE: Those who don't work, don't eat. Go find your own food. Me? I'm okay. Women are grand by birth.

Faye gobbles up the rest of the dog food. Ein sits and watches. Faye sits down and picks up a poster for their next target.

JET: Damn, blues harp music is good. It's just as good as I thought.

SPIKE: I thought you were a fan of jazz music?

JET: Don't be stupid. I even warbled when I was sucking on my mother's milk!

SPIKE: You were a pretty thoughtful kid...

Spike identifies their next target.

JET: All right, I'm going from the right. You go from the left.

SPIKE: The ball's in your court.

FATTY: Oh! Who'd have thought, it's Jet Black! When the hell did you get here?

JET: How about you? You look so easygoing! Did ya catch a big one?

Giraffe follows a man in a wheel chair and the harmonica player. Spike follows them.

JET: I didn't know you were a fan of blues music.

FATTY: You're kidding me. I've lived only for the blues since I was in my dad's sac!

The crippled man and the boy board a taxi cab. Giraffe calls for a taxi and continues chasing them. Spike heads for Swordfish II in a parking lot.

A hotel. Giraffe kicks in a door and finds the crippled man and the boy. 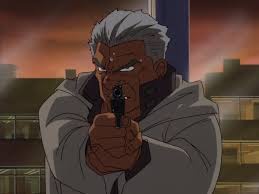 GIRAFFE: Give him back! Zebra!

Giraffe crashes out a window. Spike catches him with Swordfish and lands.

SPIKE: Hey you! Don't die! Hey! Shit, are you going to wipe out my bounty?

GIRAFFE: D-Don't be fooled by his appearance...

The Bebop. Jet examines the stone.

JET: I can't say for sure until I analyze it but it might be worth a hefty sum. So, what are ya gonna do?

Jet tosses the stone to Spike.

FAYE: There is no harm. After all, it's not your duty to help the kid.

Spike snatches it back.

SPIKE:  This is gonna pay for our food. There's none for you.

FAYE: You have such a poor heart.

FAYE: Oh, what's this? An invoice? What for?

JET: All the expenses that you've racked up on our ship. Thanks for your business!

An outdoors cafe. Jet and Fatty sit at a table full of pastries.

FATTY: So why are you asking about the dead bounty?

FATTY: So you were after Giraffe, too.

Fatty takes the cream off the top of a cake and eats it.

FATTY: Ya got a good deal?

FATTY: Ah well. There's no bounty in it anyway.

JET: No, no. There really is nothing.

FATTY: Ah well. You'll owe me one for today. You know that kid on the blues harp the other day? Giraffe was after that kid Wen's father. His old acquaintance, Zebra.

FATTY: You didn't even know that? That they were the top of the Volunteer Self Defense Squad until ten years ago?

JET: But why is he after an old comrade?

FATTY: Three years ago, Zebra and Giraffe accepted to reclaim a certain facility. But, a few days later, Zebra ends up missing and Giraffe finds himself blindfolded in a weird place he'd never seen before. Giraffe was going after the top spot in the group, but he was betrayed. But Zebra was still alive.

Back on the Bebop.

FAYE: So, in the end, Giraffe was killed by some form of betrayal?

JET: Women easily betray others, but men live for duty.

Spike follows Wen and Zebra into a shady warehouse. The lights suddenly blaze on. Spike points his gun at them.

WEN: Who are you?

WEN: What do you want?

SPIKE: Giraffe asked me to help you.

FAYE: Then why did Giraffe tell him to help the kid?

Jet and Faye look at an old newspaper article on Wen.

FAYE: This kid's showing up here, too. He must be pretty famous.

JET: Yeah. The kid's a genius.

Faye notices the man behind Wen in the photograph.

JET: What the-?! Why the hell is this kid in an article from 30 years ago with the same face?!

Back at the warehouse.

SPIKE: Come on. There's nothing to fear. Come over here.

Wen shoots Spike's near the elbow. He drops his gun.

WEN: Little twerps should stay outta this. If you stick your neck in too far, you'll get burnt.

SPIKE: Don't give me that conceited crap, kid.

SPIKE: All kids say that.

WEN: I may look like this, but I've been alive since the days when humans crawled only on the face of the Earth.

Fifty year ago. A hyperspace gate outside of Earth explodes. Wen emerges from a pile of chared bodies. 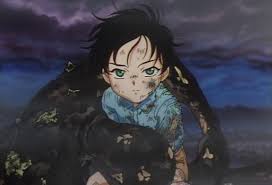 WEN: It started on the day of the accidental explosion of the hyperspace gate. My body has ceased to age. I can't die. The guys that took interest in me, and experimented on me, all died before me. The end for this guy started when he snuck into the lab. I needed a "parent" to use as a cover.

WEN: I think this was the third guy. Now, gimme the ring.

Wen continues to fire at Spike. Spike dodges and retrieves his gun and shoots back at him. Wen flees and pushes Zebra down a flight of stairs. Spike catches Zebra and shoots Wen in the head. Wen falls. Spike sets Zebra down and goes to the spot Wen fell. He only finds a large puddle of blood.

JET: Give me a break, you big klutz! You're lucky you got away with this little since we don't have the money for a funeral!

Faye walks near Ein and notices tears from Zebra's eyes.

Jet and Spike begin to notice.

Zebra is hooked up to a machine that reads mental images and displays them on a monitor. There is only noise on the monitor. 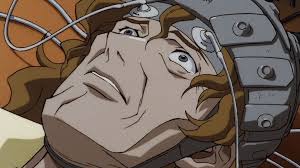 A picture of Giraffe rushing into the hotel room forms.

JET: All right! Now, what are ya seein'?

SPIKE: The hotel. He's remembering the time that Giraffe died.

GIRAFFE: Give him back! Zebra! Come over here!

The picture disintegrates into noise again.

JET: Shit! And then what? What did Giraffe say!?

GIRAFFE: I have it now. I can do you in with this. This is a stone that will return time to you!  Now, hand Zebra over to me! Zebra!

Giraffe is shot out of the window.

The stone is carved into a bullet. Spike loads a gun with it, puts the gun in a holster and slings it over his shoulder.

JET: When the gate exploded, a vast amount of energy and an imaginary coordinate system were created from the resulting twists in hyperspace and got enclosed into the gem of this ring. And that same energy broke Wen's circadian rhythm. His pineal gland continually produces a substance similar to melatonin that inhibits aging. That's how the theory goes in a nutshell. You understand?

JET: I don't either. So, in other words, there's no way to make sure other than to stick that gem into Wen. I don't know what will happen. It might explode the moment you shoot it in.

SPIKE: This makes me excited.

Spike begins to walk out. Faye stops him midway.

SPIKE: Oh, so you're finally going to leave us?

FAYE: No, you aren't coming back.

Jet puts a cigarette in Spike's mouth and lights it.

Spike takes off in Swordfish.

FAYE: Men are such idiots...

The city. Wen kills a taxi driver and steal his cab. Spike shoots at it in Swordfish. The cab crashes into a gas pump off road and explodes. Wen emerges from the flames and shoots at Spike. Spike aims his gun at Wen and shoots the gem directly into his forehead. Wen begins to age immediately and collapses.

Wen dies. Spike takes Wen's harmonica and blows into it.

Spike tosses the harmonica into the air and points his finger at it.

"LIVE in Baghdad" blasts in the background.

SPIKE: HEY, DO YOU KNOW WHAT HEAVY METAL IS?!

FAYE: WHAT DID YOU SAY?!

JET: HEY, CAN YOU DO SOMETHING ABOUT THIS RACKET?!

SPIKE: THIS IS RUNNING IN THE BACKGROUND DURING THE ENTIRE NEXT EPISODE!

JET: MAYBE I SHOULDN'T APPEAR, THEN!

FAYE: I CAN'T HEAR A DAMN THING YOU'RE SAYING!!

FAYE: ARE YOU SURE THEY CAN REALLY HEAR US?!