FLIGHT ATTENDANT: Soon, this flight, 210, will arrive on Venus. Some people may have an allergic reaction to the floating plants used in the terraforming of Venus. It has a chance of degenerating into Venus-sickness so if symptoms appear, please consult a doctor immediately.

HUEY: Quiet down, everyone! Both hands behind your heads! All of you!

RICH MAN: I-I'll give you money! I don't care about the others, let me off...

Louie hits the rich man in the head with the but of her machine gun.

LOUIE: Anyone who makes a ruckus ends up like him!

A man named Roco, carrying a container wrapped in cloth, cowers in his seat.

ROCO: Dammit... why did this have to be the day?

DEWY: You over there! HEY!

DEWY: You listening to me?! You! Get up!

DEWY: All right. Quietly put both hands behind your head...

DEWY: Hey! Don't fall asleep! Who the hell do you think we are?!

Spike gets of stretching, pushing Dewy aside.

Dewy swings the barrel of his gun at Spike. Spike ducks and head butts him. Huey charges at Spike from behind. Spike flips him onto Dewy.

Faye sprays Louie with a container of sedatives. Louie passes out.

FAYE: Enough of YOU, Ms. Bounty.

The Bebop drifts next to the shuttle. 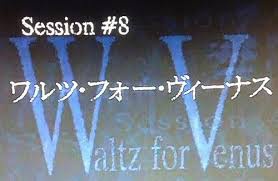 The spaceport. A postal service desk.

ROCO: That's not written anywhere up there!

POSTAL WORKER: But it's not to normal residential quarters.

POSTAL WORKER: All the way out there to the middle of the desert...

Roco spots Spike. He leaves a package and money on the desk.

ROCO: Make sure it gets there! Got that?!

Spike collects the bounty for the hijackers from a machine.

SPIKE: Thanks for the business.

FAYE: I need it now.

Spike transfers a portion of the bounty onto Faye's money card.

SPIKE: That's all you get.

FAYE: I know that!

Faye takes her card and walks off.

SPIKE: Depositing it at the casino again?

FAYE: It's better than a bank!

SPIKE: She never gives up...

Roco rushes toward Spike with a knife from behind. Spike trips Roco and he stumbles to the floor.

ROCO: You're the one that rounded up the hijackers with some amazing moves, right? I have a favor to ask. Can you teach me how to move like that? Is it Judo? Or Kung Fu?

ROCO: Hey, wait a minute. I want to be strong, like you.

SPIKE: You're an annoying guy. A no is a no.

The elevator door opens. Roco stands in front of it out of breath from running down flights of stairs. Spike walks away. Roco follows.

SPIKE: I'm out of that right now.

They walk out of the spaceport.

ROCO: Come on, please, it's not like you're losing anything.

Spike notices that the pitch of his voice is high outside.

ROCO: Venus has a lot of helium in the atmosphere. You can fix it quickly with some medicine.

Roco takes out a caplet. Spike takes it, swallows it and walks away.

SPIKE: You're the one that-

The pitch of his voice didn't change. Roco laughs.

ROCO: That was just a throat drop.

Roco does some stupid gestures.

The Bebop. Petting Ein, Jet searches for another bounty on the computer.

JET: Our first income in a while. I'll feed you something good.

JET: This is all thanks to the mastermind. And next up...

The spaceport. A group of thugs search for Roco.

A grassy strip of land outside the spaceport. Spike trains Roco.

SPIKE: I'm telling you to not tense up!

ROCO: But you can't defeat enemies that way.

SPIKE: The flow is more important, not power. You have to be like the water. You get it?

ROCO: Not one bit.

SPIKE: That's what I thought. All right, come after me with a knife.

SPIKE: Just do it.

Roco takes out his knife.

ROCO: All right, here I come!

SPIKE: I'm not tensing up anywhere. I'm just using your excessive force. I control the flow of power and to do that, I have to relax the whole body to be able to react to any movement. Yeah, I become like water.

SPIKE: Yeah. Water can take any form. It can flow along slowly or beat down aggressively, right?

Roco is alerted to the entrance of the spaceport. The thugs shove an old man.

OLD MAN: You should take care of you elders!

ROCO: Here, hold this! Tonight... No, tomorrow night. At the cathedral on the outskirts of this town!

Roco runs away. The thugs chase after him.

THUGS: There he is! Don't let him get away!

JET: Casino? The ones around here are famous for being stingy...

SPIKE: Don't worry about it. It's not our money...

JET: On top of it, she takes off like a bullet and we don't know when she gets back... Hey, no use wasting time. How about making some pocket cash?

Jet switches on the monitor.

JET: Piccaro Calvino. Usually a stingy little thief, but went in big this time. Price is doubled if we get the whole crew.

Spike spots Roco on the screen. Jet flips to an image of a plant.

JET: And this is the stolen goods. It makes the remedy for Venus-sickness, but apparently it's hard to grow them and they're worth tens of millions.

Venus streets. Roco runs from the thugs. He shoves aside a bystander.

Roco loses them around a corner.

THUG A: Shit, where did he go?

THUG B: Shit, he's sure good at running.

FAYE: I say we take it. I mean, it's worth much more than nabbing that group.

FAYE: Hey, you thought for a moment!

JET: Idiot! It's better to not be involved with dangerous stuff like this!

FAYE: It's okay if they don't find out, right?

JET: So how much did you lose at the casino?

SPIKE: I'll leave Piccaro up to you. I'm going after Roco.

FAYE: Why don't you wait? You're gonna see him anyway...

SPIKE: They say that Lady Bounty only has bangs.

Spike flies over a Venus desert in Swordfish II.

JET: Remains of a shuttle? Why in such a place?

JET: There might be some weirdos that do live out in the desert, but still...

An ruined shuttle in the middle of the desert. Spike enters. A young woman points a gun at him. She is Stella, Roco's sister. 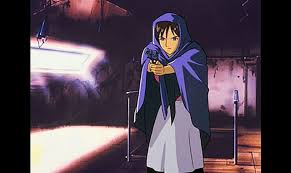 STELLA: Don't move! Both hands up!

SPIKE: I'm nobody suspicious... That makes me sound even more suspicious, doesn't it?

STELLA: Who are you? Why are you here? Answer me!

Stella walks toward Spike and stumbles. Spike catches her.

A public bathroom. Roco relieves himself. He spots Piccaro next to him. Piccaro smiles. Two thugs walk out of a stall.

THUG A: Hey, make sure you wash your hands.

The shuttle in the desert. Spike and Stella sit with a kettle of tea.

STELLA: You know, it's all because of those floating plants. Sometimes they send spores that look like snow. Most people are fine, but my body isn't... and my eyes...

STELLA: No. It's not a big deal once you get used to it. Besides, sometimes you understand more when you can't see.

SPIKE: He cares about his little sister.

Stella takes a music box from the shelf.

STELLA: Roco sent me this yesterday.

STELLA: Everyone says bad things about him... and he seems to hang out with some bad people... But Roco is a good person.

SPIKE: I might be one of those bad people he hangs out with.

STELLA: Maybe. Maybe you are. But you're different. I can tell. Both you and Roco have something beautiful deep in you. It's hard to tell but it's there. I can see it... that's why I'm offering you tea like this.

Spike inspects the music box and finds a package of seeds. He puts the box down.

SPIKE: Something beautiful, huh? I probably lost that long, long ago...

A shady bar. Faye enters and approaches a drunk.

FAYE: I want to see Piccaro. Tell me where he is.

DRUNK: What? I don't know who that is.

Thugs laugh and draw guns. Faye shoots the guns out of their hands and drops a support beam from the ceiling on them.

FAYE: Can you remember?

JET: What did you just say? The price of a Gray Ash seed?

JET: Don't be a fool. Those things are like gems. You're lucky if you ever see one... Well, it might be difficult to sell them once you get them but I would say 8 million each. You got some?!

JET: Oh, just a little more. Don't screw up on your end.

A dark street corner. Roco is cornered by Piccaro and his thugs.

PICCARO: So, little Roco. You can be nice and tell us where the pot is. If you don't want to tell us...

The thugs close in on Roco.

ROCO: Sorry. I dropped it. That ain't gonna work, is it-?

The thugs beat up Roco.

PICCARO: My little Roco. I've heard that you have a little sister.

ROCO: She has nothing to do with this!

PICCARO: Oh, really? Then where is it?

A shady motel room. Faye finds a male couple in bed. Faye grabs one of the men and sticks her gun into his mouth.

FAYE: I want to see Piccaro. Tell me where he is.

FAYE: Huh? Where did you say?

SPIKE: And I brought it, like you told me to. Sorry, but I snuck a peek inside.

ROCO: You know what it is?

SPIKE: Grey Ash. Something spectacular unlike its name. I mean, it's 10 times the bounty placed on all of you.

Roco pulls a gun and points it at Spike.

ROCO: Run, or you'll be killed!

Faye flies away in Red Tail

FAYE: What is this?! I was just sent on some wild goose chase! Jet! Are you listening?!

The cathedral. A machine gun fires at Spike and Roco. Piccaro approaches.

PICARRO: Sorry to make you deliver it all the way here. I give my thanks.

Roco grabs the barrel of one of the guns.

Piccaro's thugs open fire. Spike runs to a corner and shoots back.

PICCARO: Get rid of him. Quickly!

SPIKE: Can't she be a little more elegant?!

JET: Don't kill them! Ya trying to kill our bounty?!

PICCARO: Bounty hunters? Get that thing back, now!

A man charges a Roco from behind.

Roco recalls Spike's moves, and flips him. He is enthralled by the accomplishment. Spike gives him a thumbs up. Roco is shot from behind. He drops the Grey Ash plant. The glass case breaks. 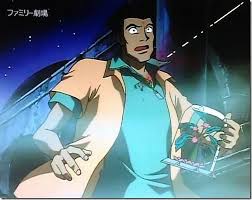 The plant withers and dies.

Roco begins to slip away.

SPIKE: I know. Leave Stella to me.

STELLA: You'll do. You know what? Roco got me some Grey Ash! And the operation fees! They told me my eyes will be better! Isn't it wonderful? What should I do...? So tell him to come here right now... to hurry over here!

STELLA: Then why isn't Roco coming?

STELLA: It's all right... leave me. I know. Roco died because he did something bad, right? Please, leave me for today...

Spike begins to walk out.

STELLA: I never got to see Roco once with my own eyes... Hey, what was Roco really like?

SPIKE: You know without looking, right? He was a great guy. Just like the one you knew...

SPIKE: Wait, who are you?

FAYE: Who the hell is this?

ED: I made that name up myself! Isn't it cool?

SPIKE: First of all, what do you mean "The Fourth?"

ED: Next Episode: "Jamming with Edward!"